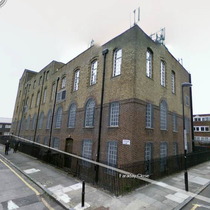 The Sandemanians were a Christian sect founded by John Glas in Scotland and spread into England and America by his son-in-law Robert Sandeman. Sandeman arrived in London in April 1761 and established a congregation which met first at Glover’s Hall, then at St Martins-le-Grand, moving to Paul’s Alley in the Barbican in 1778 and to Barnsbury Grove (this building) in 1862 where they stayed until about 1900. Faraday first attended at Paul’s Alley as a child with his parents. In 1832 he was appointed Deacon and rose to the position of Elder (one of only three) which he held 1840-4 and 1860-4, the last two years being at the Barnsbury Grove Chapel where he continued to worship until his death. This Chapel was sometimes known as the Pocock’s Fields, or Bride Street, Chapel and its street has been renamed Faraday Close. In 1906 the building was converted to be the North Telephone Exchange (how appropriate is that?) and two memorials were erected and unveiled by Lord Kelvin: the floor-mounted brass “MF” shown here, which indicates the position of Faraday's pew,and a wall-mounted plaque which marked the position which he usually occupied on the preaching platform. This latter plaque has been removed.

This section lists the memorials where the subject on this page is commemorated:
Sandemanian chapel

Awarded the OBE in 2000 for for services to interfaith dialogue and to young ...