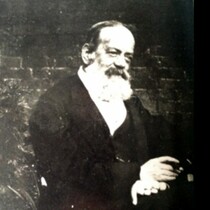 Saving Clissold Park have some lovely old photos of this man but they have eschewed the normal form of potted biography and instead have provided 13 bullets points:

These two websites agree that his date of birth was 1829 not 1828 as given on the memorials and our colleague, Andrew Behan, states that according to the Society of Friends (Quaker) Register of Births he was recorded as having been born on 2 June 1829 in Stamford Hill, Hackney. He was the fourth of the eleven children of Richard Low Beck (1792-1854) and Rachel Beck née Lucas (1802-1874).

This section lists the memorials where the subject on this page is commemorated:
Joseph Beck