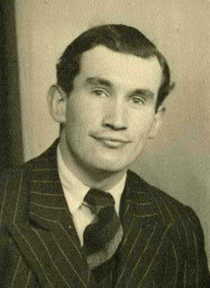 Andrew Behan has researched this man:

The Reverend Prebendary Clarke Edward Leighton Thomson was born on 25 April 1919 in Yeung Kong, China. This city is now called Yangjiang. He was the youngest son of the five children of George Dornin Thomson and Margaret Elizabeth Thomson née Everall. On 21 September 1921 the family arrived in Quebec, Canada. His father died on 23 May 1924 in Albuquerque, Bernalillo, New Mexico, U.S.A and his widowed mother and siblings arrived in Liverpool from New York on 7 September 1925 to stay with her brother Daniel Everall at Monkmoor Road, Shrewsbury, Shropshire. The 1939 England and Wales Register shows him living with his mother at Summer Fields, South Stoke, Reading. His occupation was recorded as Undergraduate (Pig Farming).

In 1943 he married Prudence Barbara Davies in Oxford and they went on to have two children, David and Penny. On 1 August 1947 it is recorded he left Southampton aboard the P & O steamship Strathmore bound for Egypt as a clergyman where he served as an Assistant Chaplain in Alexandria. He returned to England in 1950 to serve at Chelsea Old Church for 42 years until 1992, living according electoral registers and Post Office telephone directories from 1952 to 1961 at 18 Margaretta Terrace, London, S.W.3 and from 1961 to 1982 at 4 Old Church Street, London, S.W.3. His wife died on 31 July 1991 and electoral registers from 2003 to 2010 show him living at 15 Redburn Street, London, SW3 4DA. He died, aged 95 years, on 27 April 2014 in Chelsea. He was cremated and his ashes, together with those of his wife, his mother and his brother, Ian, lie in the columbarium of Chelsea Old Church.

More information and photos at EDA.

This section lists the memorials where the subject on this page is commemorated:
C. E. Leighton Thomson

Pronounced Lez-ness. Founded by Richard de Lucy, as a penance for his role in...

Originally added to the church in 1760, built flush against the facade's sout...

Christianity had already taken root in Britain but it only came under Catholi...