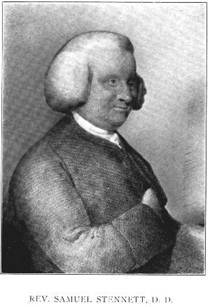 Baptist minister and hymnwriter. Born Exeter. His father was appointed minister at Little Wild Street chapel from 1737 so the family moved to London. See Andrew Gifford for the rather unsavoury reason that the post was vacant.  On his father's death Samuel succeeded his at Little Wild Street. Lived his later years in Muswell Hill (and wrote a poem about his "rural bower" with its "fleecy sheep and harmless lambs") where he died. Buried in Bunhill burial ground.

Peter Berthoud has a photo of the chapel just before demolition and it is a drum-shaped building. It was sited about where the Richard Seifert 1966 drum-shaped Space House now is. We wonder if Seifert knew and was inspired or if something really creepy is going on!

This section lists the memorials where the subject on this page is commemorated:
Samuel Stennett, DD

Musician. One of the founders of the Pink Floyd group.