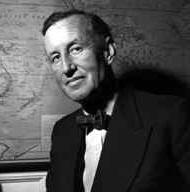 Writer. Born Ian Lancaster Fleming at 27 Green Street, Mayfair. He worked as a foreign correspondent with Reuters in Moscow, and was a senior naval intelligence officer in World War II. His varied career gave him the background for the twelve James Bond novels, which brought him worldwide success. He was also involved in creating the television spy series 'The Man from Uncle' and in complete contrast he wrote 'Chitty Chitty Bang Bang'.

His personal life is quite interesting, and complicated.  He began an affair with his future wife Ann (née Charteris) in 1939 while she was married to her first husband (a baron) and also having an affair with her next, Esmond, the heir to the 1st Viscount Rothermere. In 1944 the baron was killed in action in Italy and she married Esmond, now the 2nd Viscount, but carried on her affair with Fleming.  Esmond wasn't happy about the affair and divorced her in 1951 leaving her free to marry Fleming in 1952, after which Fleming and his wife carried on their extramarital activities.

Jamaica became a winter retreat for him and in 2011, the Ian Fleming International Airport was opened in his honour at Oracabessa. Died in Canterbury, Kent.

2016: The BBC suggests that James Bond was created, not by Fleming, but by Phyllis Bottome, a novelist who Fleming knew well. Aged 18 he was sent to the school for trouble teenagers in Austria run by Bottome and her husband, Ernan Forbes Dennis.  Bottome encouraged Fleming to write fiction and he always acknowledged his debt to the Forbes Dennises. They stayed friends until Bottome’s death in 1963. In 1946 she published ‘The Life Line’ a novel with many similarities to the James Bond novels, the first of which Fleming would publish in 1953. The suggestion is that Bottome based her spy character, Mark Chalmers, partly on her husband who had been a spy, and partly on Fleming who supplied the charisma. And then Fleming stole the character back but Bottome had no problem with the theft given the origin of her creation.

2019: An article in The Times suggests that a female spy in Casino Royale, the first Bond novel, was based on Krystyna Skarbek, Britain’s first female agent during WW2. The Polish-born countess, lived at a guesthouse at 1 Lexham Gardens in the 1950s, and was murdered there by an ex-lover, which is why the hotel currently occupying the address are refusing to allow a plaque to be erected.

2022: Country Life in an article on James Bond's London wrote "... Fleming’s house in Victoria Square bears no trace of a blue plaque — it was apparently refused by subsequent owners. Instead, the honour goes to his former bachelor pad at 22B, Ebury Street, where he lived in the late 1930s, entertaining his girlfriends and carousing with the men that belonged to his Cercle Gastronomique. Although no 007 story was ever written there, it is very much the spiritual home of James Bond."

This section lists the memorials where the subject on this page is commemorated:
Ian Fleming