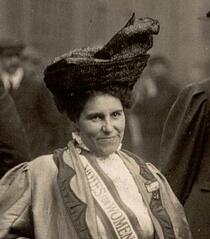 Suffragette. Born in Lewisham. As a child, she survived poliomyelitis and had to use crutches or a tricycle, modified as a wheelchair. She was active in the women's suffrage movement and founded the Greenwich branch of the Women's Social and Political Union. During the window-smashing campaign in March 1912, she apparently hid stones beneath the rug that covered her knees.

She was imprisoned twice and was force-fed when she went on hunger strike. In 1913 she chained herself to the gates of Buckingham Palace, and took part in the mass deputation of suffragettes to petition King George V in 1914. Though she was not arrested, it is said that two policemen deliberately tipped her out of her wheelchair. Worked for Christabel Pankhurst’s campaign in the 1918 election then later joined Women’s Freedom League and Suffragette Fellowship. Died in a hospital in Twickenham.

This section lists the memorials where the subject on this page is commemorated:
Rosa May Billinghurst