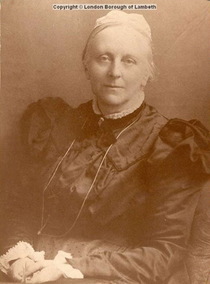 Born Caroline Anne, daughter of Richard Martineau, a director and partner of the Whitbread Brewery.

Early on she was interested in the study of natural science, attending lectures at the Royal Institute. She went on to write both books on the subject for children and scholarly papers. Aged about 30 she came under the influence of Octavia Hill and began work as a rent-collector, which to Hill was a role more like today's social worker. There she met Emma Cons and they became friends. Then together with her sister she acquired property so they could look after their own tenants.

She chose not to marry while the position of women was so unsatisfactory. Began teaching at Morley College shortly after it was formed in 1889. Was principal from 1891 until her death in 1902. She was unpaid, and each term-time night travelled from her Bayswater home to the Lambeth college. She gave generously to the college, her last gift being a physics laboratory on the top floor of a building attached to the college.

Offspring of the Vic: A History of Morley College By Denis Richards is very informative.

This section lists the memorials where the subject on this page is commemorated:
Caroline Martineau

Caroline Martineau, born 1844. Caroline was one of the earliest teachers at M...

Inspired by the School of Handicraft, this college, founded by William Lethab...

Educationalist and writer. Born Cincinnati, Ohio. She came to Britain in 1948...