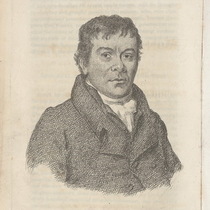 Wikipedia tells the sorry story of this man. Born to a West African slave woman in Jamaica, his father, James Wedderburn, being a Scottish doctor and plantation owner, who had children by several different slaves. It gets worse: "After she had already given birth to two children by him Wedderburn sold Robert's mother Rosanna, then five months pregnant with his third child, back to her previous owner." He was born free and after his mother was sold away from him, was brought up by his maternal grandmother.

Aged 16 he joined the Royal Navy and came to live in the St Giles slum. When he appealed to his father and half-brother for assistance they spurned him. 1786 he converted to Methodism/Unitarianism and then began writing and preaching. He spoke about the iniquities of slavery, the conditions on board the ships and the position of the working class in Britain. But his life seems to have continued its chaotic course: he was imprisoned for brothel-keeping, was briefly in New York where things did not improve.

This section lists the memorials where the subject on this page is commemorated:
Robert Wedderburn