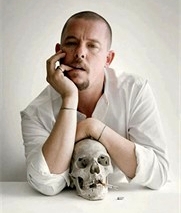 Fashion designer. Born in Lewisham Hospital, as Lee Alexander, he was known as Lee to his family and friends, but was Alexander to the rest of the world. He served his apprenticeship in Savile Row and worked in Milan for Romeo Gigli. Returning to Britain, he was eventually appointed as head designer for Givenchy. He was a four times winner of the British Designer of the Year Award.

His temperament, described as 'fragile', and the death of a close friend, Isabelle Blow, may have contributed to his psychological descent. He was prescribed anti-depressants, but the death of his mother to whom he was devoted, most likely tipped the balance. He was found hanged in his flat the day before her funeral.

This section lists the memorials where the subject on this page is commemorated:
Alexander McQueen

Roman pottery, also called Sulloniacis. It is known only from an entry in the...

Student at Eltham High School, who co-designed the Buddy Bear statue in Woolw...