Initially we could find nothing about Trotter but shortly after publishing the Clapham trough we were contacted by Andrew Behan who told us about a Trotter fountain in Fulham with, crucially, his date of death. With this Andrew found Ancestry.com which reads: "Robert Trotter Esq. 24th January 1878. The will with a codicil of Robert Trotter, formally of Board Hill near Cuckfield in the County of Sussex but late of 26 Thurloe Square in the County of Middlesex, who died 27th December 1877 at 26 Thurloe Square was proved at the Principle Registry by Thomas Allen Dent of 28 Thurloe Square, one of the Executors. Personal estate under £8,000. Resworn December 1878 Under 30,000." Andrew goes on to say "Both the 1861 and 1871 census returns show him as a magistrate, being born in St James's London, living at 26 Thurloe Square with his wife Emma, a butler, a cook and various domestic servants." And from census returns Andrew deduced his date of birth as 1797/8.

The indefatigable MDFCTA have another three Trotter fountains: in Notting Hill, Blackheath and one way out in Waltham Abbey.  We hope to capture the first two soon but doubt we'll ever got out to Waltham Abbey.

MDFCTA writes: "“I found that trough by a complete accident. I was looking for one that, for many years, stood outside a pub in Epping Forest (one of two in Epping Forest donated by a Miss Constable). Someone told me that it had been moved to a local riding school. I enquired at the stables - there wasn't a trough there but the owner told me it had been moved to The Rookery, Pynest Green Lane, High Beech, Waltham Abbey, Essex. When I visited the trough I expected to find a "Miss Constable" inscription and was surprised to find it was "Trotter trough" moved from somewhere else in London.”

Are there any more Trotter fountains or troughs? Let us know.

2016: The Notting Hill trough is at Portland Road/Clarendon Cross.  Having visited we can report that the only inscriptions are the usual MDFCTA and (difficult to read) religious texts at each end.  There is no reference to the benefactor so, in our terms, it is not a memorial and so we have not collected it.

This section lists the memorials where the subject on this page is commemorated:
Robert Trotter 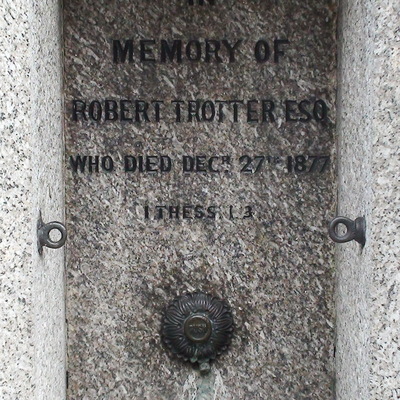 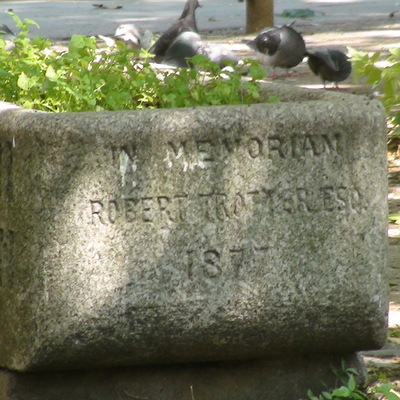