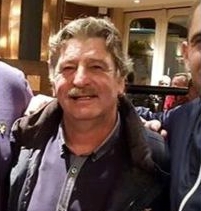 Robert Henry Peter Huxley was one of twin sons born on 22 July 1953 to Walter James Frederick Huxley (1914-1959) and Giovanna Rosa Huxley née Previero (1918-1976) in Thornton Heath, Surrey. His brother was Philip M. A. Huxley and their births were registered in the 3rd quarter of 1953 in the Croydon registration district.

He married his cousin, Eileen J. Huxley (b.1955), in the 2nd quarter of 1979 in the Croydon registration district and they had two sons: Ross Robert Huxley (b.1981) and Adam Walter H. Huxley (b.1986). Electoral registers from 2003 to 2010 show them listed at 20 Aldrich Crescent, New Addington, CR0 0NL. The Inside Croydon website gives details of his life.

This section lists the memorials where the subject on this page is commemorated:
Robert Huxley

Michael Stanley Brewster was born on 22 March 1953 in Derby, Derbyshire, the ...