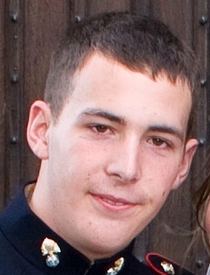 Soldier. Born as Lee James McClure (he later took his stepfather's surname) in Crumpsall, Manchester. He joined the army in 2006, and was selected to be a member of the Corps of Drums, serving in Cyprus and Afghanistan. He was later based in Woolwich in a recruitment post, and it was here, while off-duty, that he was hacked to death in the street by a pair of fanatics.

This section lists the memorials where the subject on this page is commemorated:
Lee Rigby