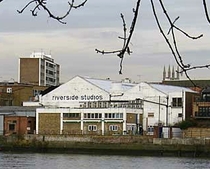 Artistic venue. Originally a warehouse, it was taken over by the Triumph Film Company in 1933, and then acquired by BBC Television in 1954. Several episodes of 'Hancock's Half Hour' and 'Doctor Who' were produced here. After the BBC moved out, the building was developed to cater for a mixed programme of live theatre, music, dance and film.

This section lists the memorials created by the subject on this page:
Riverside Studios

Originally unveiled in 2014, by Doctor Who's first Director, Waris Hussein.