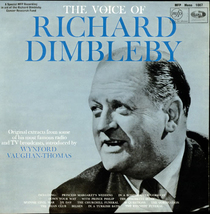 Broadcaster and journalist. Born Richard Frederick Dimbleby in Richmond, Surrey. In 1936 he was appointed as the BBC's first news observer and in 1939 became their war correspondent. He was the first radio reporter into Berlin at the end of the war and also the first into Belsen concentration camp. For many years he was the natural choice to commentate at major events. Such was his authority that when, in the Panorama television programme of April 1st 1957, he reported on the European spaghetti tree harvest, many people believed him, (at that time, pasta was considered to be an exotic foodstuff). Died in St Thomas' Hospital. He was the first broadcaster to be commemorated in Poets' Corner, Westminster Abbey, with a plaque sculpted by his third son Nicholas.

This section lists the memorials where the subject on this page is commemorated:
Richard Dimbleby