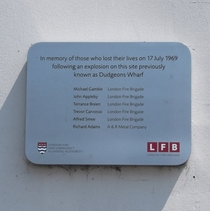 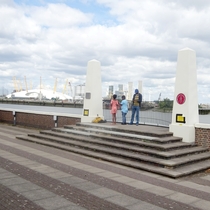 The unveiling of this plaque was reported in the East London Advertiser of 24 December 2009.

Andrew Behan has researched the names on the plaque and notes: the plaque uses 'Terrance Breen' when every official source has 'Terence Breen'; the 'Richard Adams' on the plaque was actually 'Reginald Adams'.

This section lists the subjects commemorated on the memorial on this page:
Dudgeon's Wharf explosion - oblong plaque

J. &amp; W. Dudgeon were shipbuilders on the Thames. The company passed throu...

Demolition worker, employed by A &amp; R Metal Company, killed in the Dudgeon...

This section lists the subjects who helped to create/erect the memorial on this page:
Dudgeon's Wharf explosion - oblong plaque

The body that governs the London Fire Brigade, responsible to the Mayor of Lo...

This section lists the other memorials at the same location as the memorial on this page:
Dudgeon's Wharf explosion - oblong plaque

To commemorate the gift of this wall fountain by the Master, wardens, assista...

Tasty Toasties was officially opened by Frank Bruno (MBE) on the 8th March 2000.

Deptford CreekThis is the mouth of the River Ravensbourne, first bridged in 1...