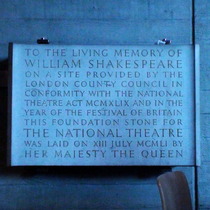 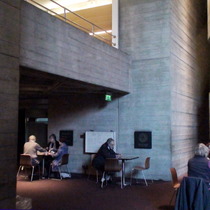 To the living memory of William Shakespeare on a site provided by the London County Council in conformity with the National Theatre Act MCMXLIX {1949} and in the year of the Festival of Britain this foundation stone for The National Theatre was laid on XIII July MCMLI {13/7/1951} by Her Majesty the Queen.

British Pathe have film of this ceremony: The Queen Mum looks pretty experienced with a cement trowel and stone hammer, while the then Princess Elizabeth holds the flowers. Annoyingly one can't see exactly where the stone is being laid, annoying because it was in the wrong place and had to be quietly moved a year later. It was, we believe, somewhere on the site of the present Hayward Gallery, QE Hall and Purcell Room.

This section lists the subjects commemorated on the memorial on this page:
National Theatre foundation - 1951

This section lists the subjects who helped to create/erect the memorial on this page:
National Theatre foundation - 1951

This section lists the other memorials at the same location as the memorial on this page:
National Theatre foundation - 1951