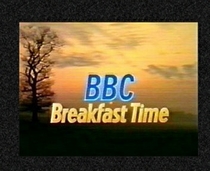 British television's first national breakfast television programme, Produced by the BBC it was revolutionary for the time, mixing hard news with light-hearted features. The presenters, typically wore casual clothes instead of formal suits, In 1986 it adopted a more formal news format, losing its cosy traditional sofa and jumpers format. In 1989 the show became known as Breakfast News.

This section lists the memorials where the subject on this page is commemorated:
Breakfast Time

Playwright and novelist. Born in Chicago. She visited Britain as part of a pr...

The Duchess of Duke Street

BBC television series, loosely based on the career of Rosa Lewis. It starred ...

See Broadcasting House memorial for the names and biographies of these men an...