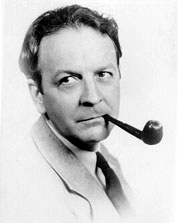 Novelist. Born in Chicago, Illinois. After his father abandoned the family, his mother moved him to Britain to further his education, At Dulwich College. He worked for a while at the Admiralty, but tiring of this, returned to the U.S.A. in 1912. In World War 1, he served with the Canadian army in France and then in the R.A.F. During the depression, he took to writing detective novels of which 'The Big Sleep', 'Farewell My Lovely' and 'The Long Goodbye' are the best known. Died in La Jolla, California.

This section lists the memorials where the subject on this page is commemorated:
Raymond Chandler

This entry has kindly been written for us by Franklin Bishop, expert on Polid...