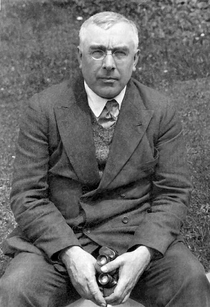 Philosopher. Born in Moscow. He became a pupil of George Gurdjieff who taught that most humans live their lives in a state of hypnotic "waking sleep", but that it is possible to transcend to a higher state of consciousness and achieve full human potential. He went on to develop his own theories and developed the concept of esotericism. He moved to London after the Russian Revolution, where his lectures were attended by literary figures such as Aldous Huxley and T.S. Eliot. Died at Lyne Place, Surrey.

This section lists the memorials where the subject on this page is commemorated:
Piotr Ouspensky

Novelist, considered one of the greatest writers in English, despite it not b...

Novelist and poet. Born Kingsley William Amis in Norbury. His many novels inc...