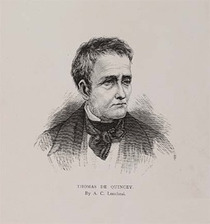 Born Manchester. Author, best known for "Confessions of an English Opium-Eater" (1821). Was as addicted to books as much as to drink or opium, sometimes renting an extra lodging (which he could not afford) because the first was full of books and papers. Reacted badly to his sister's death when he was a child, dwelling on the details of her corpse and post-mortem for longer than is healthy, Developed a profitable line writing sensational reports of murders, rapes, etc. for the mass magazine audience. Wrote "On murder considered as one of the fine arts" and stories of criminal detection which put him among the early detective fiction writers. Married and had 8 children but then moaned about how the noisy, hungry children kept inspiration at bay. His solution was to leave them in poverty for most of the time while he lived with friends, doing little work. Died at home in Edinburgh.

This section lists the memorials where the subject on this page is commemorated:
Thomas de Quincey