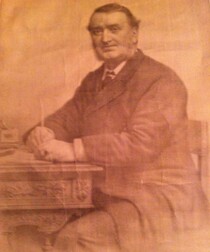 Robert Edwin Hemblington Goffin was born in 1836 in Highgate, Middlesex, the eldest of the eleven children of John Breeze Goffin (1799-1874) and Martha Goffin née Hall (1810-1891). On 9 October 1836 he was baptised at St Michael's Church, Highgate and the baptismal register shows his father as a policeman. The 1851 census show him as an agricultural labourer living in Hemblington, Norfolk, with his parents and seven of his siblings. His father was now also shown as an agricultural labourer.

On 10 January 1860 he married Jane Young (1833-1872) in Ticehurst, East Sussex and they had seven children. The 1861 census shows him as a school master living with his wife and their daughter Ella Jane Goffin (1860-1934) at the School House, Exton, Rutland. The 1871 census continues to show his occupation as a schoolmaster, but by now he was living at 13 St John's, Woking, Surrey, with his wife, six children and a general servant.

On 16 October 1872 he was initiated as a freemason in the Wey Side Lodge No.1395 that held their meetings at The School Room, Church Street, Woking Village, Old Woking, Surrey. The lodge remained here until 1877 when it moved to the Crown & Anchor Inn, Main Street, Old Woking and finally in 1884 transferred to the Masonic Hall in Bath Road, Woking. He stayed a member of this Lodge until he resigned on 29 June 1907.

In 1874 he was appointed as the first headmaster of the United Westminster School that had been formed the previous year by the amalgamation of the former Brown Coat, Green Coat and Black Coat charity schools.

In 1878 he joined the Carnarvon Lodge No.1572 which held their meetings at the Albion Tavern, Aldersgate Street, London and remained a member until March 1910.

The 1881 census confirms he was living at The Master's House, United Westminster School, Alexander Street, Westminster, with his wife, seven children and a domestic servant. (Alexander Street is now called Palace Street).

Together with 19 other freemasons he petitioned the United Grand Lodge of England to create a new lodge to be called The Abbey Lodge No.2030, and this was granted on 31 January 1884 and he remained a member until March 1910.

The 1891 census returns show him living at Margaret's Lodge, United Westminster School, Palace Street, Westminster with two of his daughters from his first marriage together with two general servants, whilst his wife is recorded at 10 Lower Sandgate Road, Folkestone, Kent, with their three sons and one daughter.

In 1892 he was one of nine Commissioners for the new Westminster Public Library in Great Smith Street, SW1.

The 1901 census shows him as a schoolmaster living at 57 Palace Street, Westminster, with his wife and their four children, a cook and a housemaid.

Probate records show that by the time of his death, aged 85 years, on 18 January 1922 he was living at St Margarets, New House Park, St Alban's, Hertfordshire and that when probate was granted to his widow and one of their sons on 7 March 1922, his effects totalled £3,808-10s-0d. He was buried at All Saints Church, Wakes Colne, Colchester on 24 January 1922.

This section lists the memorials where the subject on this page is commemorated:
R. E. H. Goffin

Originally called Bessborough House, it was built by William Ponsonby in the ...