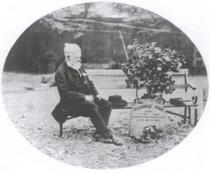 From London Gardens Online: “Quaker Gardens is all that remains of the former burial ground of the Society of Friends, or Quakers, on a site once part of Bunhill Fields that the Society purchased in 1661. The land was subsequently extended and thousands of Friends were buried here ….. A school was built here in 1840 and in the corner of the garden is what remains of the Society’s Memorial Buildings, built in 1881. All but one wing of the building was demolished as a result of WWII bombing. The burial ground was closed in 1855 and in 1880 the Metropolitan Board of Works compulsorily purchased some of the land. It was eventually laid out as a recreation ground in 1965 within the GLC's Banner Street estate. “

This section lists the memorials where the subject on this page is commemorated:
Quaker Gardens

To the left of this huge plaque there is a small, simple and extremely well-m...

Leased by John Evelyn from Charles II in 1663 and trashed by Peter the Great ...

The "Bachelor Duke" after whom the Cavendish banana was named. Born Paris, s...

From London Gardens Online: "The water that runs through New River Walk is ac...