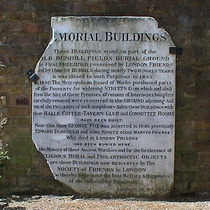 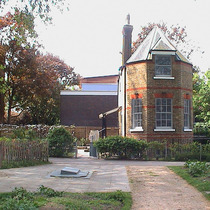 Memorial Buildings
These buildings stand on part of the Old Bunhill Fields Burial Ground. The first freehold possessed by London Friends, used by them for burials during nearly two hundred years, it was closed to such purposes in 1855.
In 1880 The Metropolitan Board of Works purchased parts of the property for widening streets from which, and also from the site of these premises, all remains of interments being first carefully removed were re-interred in the ground adjoining. And out of the proceeds of such compulsory sales these buildings with their halls, coffee-tavern club and committee rooms have been built.
Near this spot George Fox was interred in 1690, previously Edward Burrough and some ninety other martyr Friends who died in London prisons had been buried here.
To the memory of these ancient worthies and for the furtherance of religious, moral and philanthropic objects are these buildings now dedicated by The Society of Friends in London {in the hope} thereby to promote the best welfare & happiness of the surrounding population.
London, 10, Mo., 1881.
{We believe that the date means "10th month", i.e. October.}

This garden is easily confused with the nearby Bunhill Burial Ground.

The slate memorial can be seen in the foreground. The large white plaque is further back, on the low wall.

The City of London gives:
The gardens are a small fragment of a Quaker burial ground (which was also known as Bunhill Fields Burial Ground) and which was the first freehold property owned by Quakers, bought in 1661 and used until 1855 for 12,000 burials. George Fox, Edward Burrough and John Bellers were buried there.

This section lists the subjects commemorated on the memorial on this page:
Quakers - Memorial Buildings

Died in London prisons and were buried in Quaker Bunhill Fields Burial Ground.

Founder of the Society of Friends (Quakers). Born Leicestershire. Died in a...

This section lists the subjects who helped to create/erect the memorial on this page:
Quakers - Memorial Buildings

Society of Friends in London

English Buildings has a good short intro to Quakers in England and an assessm...

This section lists the other memorials at the same location as the memorial on this page:
Quakers - Memorial Buildings