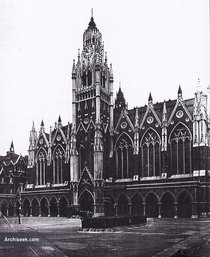 In 1868, the area being a notorious slum, Angela Burdett-Coutts had Columbia Market built as a covered food market with 400 stalls. But for various reasons it was not a success, and after being used as warehouse and workshops the market closed in 1886. Immediately east of the market Coutts also built the residential Columbia Dwellings, completed 1859-62, which had its own church, swimming pool and baths and a laundry, all designed by Henry Darbishire. The name 'Columbia' was chosen in recognition of the bishopric of British Columbia, founded by Burdett-Coutts in 1857.

Drawings and photos show some impressive buildings, but despite their quality they were demolished in 1958. The modernist tower block Sivill House and other low-rise housing replaced the Coutts buildings. The new streets having names such as Old Market Square and Georgina Gardens.

This section lists the memorials where the subject on this page is commemorated:
Columbia Market

In memory of those who lost their lives when a bomb penetrated the Columbia M...

Pubs History says: "This pub was called the Goat until 1725 when the name was...