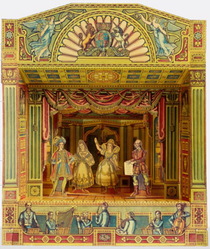 This was started by John Redington, selling printed sheets of characters and scenery for toy theatres. He ran it until his death when his family took over. 1877 his daughter Eliza married Benjamin Pollock (1856–1937) and they ran the shop, changing its name to Benjamin Pollock's Toy Shop and selling the theatres as well as the sheets, until 1944 when the stock was sold and the business reopened as Benjamin Pollock Limited under new management at 1 John Adam Street in the Adelphi Building.

Spitalfield's Life has a good post about this business.

This section lists the memorials where the subject on this page is commemorated:
Pollock's toy theatre shop