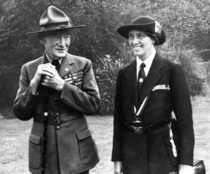 Born Olave Soames in Derbyshire. 1912 met Robert Baden-Powell on a trans-Atlantic ocean liner. They discovered that they shared a birthday, even if they were 32 years apart. This didn’t stop them marrying only 10 months later. 1919 -1938 lived in Hampshire in a house called Pax Hill. They had 3 children and also brought up Olave’s 3 nieces when their mother died early.

Olave helped her husband in the usual ways at the time (typing, driving) but did not actually originate the Girl Guides. This was set up by Robert and his sister Agnes. In 1915 Olave began by organising Guiding in Sussex and her success there led to her becoming Chief Guide in 1918. She led the Guides for the next 40 years.

From October 1938 until Robert's death in January 1941 the Baden-Powells lived in Kenya. When she returned, in 1942, her Pax Hill home was being used by the Canadian military so she moved into a 'grace and favour' apartment in Hampton Court (1943-76). Died in a care home in Surrey.

This section lists the memorials where the subject on this page is commemorated:
Olave Baden-Powell

This plaque was unveiled in the centenary year of Olave's birth.