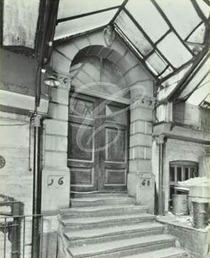 In 1484 the Pewterers Company acquired a site in Lime Street (which they still own) where they built a Hall, completed in 1496.  This was destroyed in the Great Fire of London and a more modest second hall was built on the site in 1670.  The Company used this less and less, last dining there in 1801.  It was damaged by a fire in 1840, not repaired and demolished in 1932.  Some items were rescued: the oak panelling from the Charles II Master’s parlour is held by the Geffrye Museum; more oak panelling and chandeliers are incorporated in the Court Room of the 1961 third hall in Oat Lane, and the stone entrance arch was re-erected on the UCL campus.

The picture shows the entrance in place at Lime Street in 1932.

Pewterer's Hall is marked on the 1746 map of London. It's set back from Lyme Street on the section now occupied by numbers 15 and 18, immediately to the west of The Bunch of Grapes.

This section lists the memorials where the subject on this page is commemorated:
Pewterers Hall