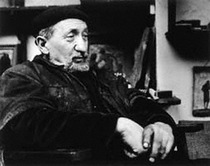 Born in Hungary as Ladislas Weisz. Moved to Berlin in the 1920s and became, the less Jewish-sounding, Laszlo Peri. He and his wife Mary were active Communists and so had to leave Germany in 1933 and moved to England, when he became Peter Peri. Lived in Ladbroke Grove. In the late 30s they lived at 10 Willow Road, Hampstead. 1938 - 66 had a studio in Camden Town. 1939, as Peter Peri, he became a British citizen and at some point he became a Quaker.

Locations of other London sculptures include: Forest Gate Methodist Church, Woodrange Road, E7. Our Picture source has photos of other Peri sculptures.

In April 2017 a lost Peri sculpture, Sunbathers, was found. It had been displayed at the Festival of Britain and then languished in a hotel garden in Blackheath. After restoration it will be displayed at the Royal Festival Hall and then a permanent home will be found for it.

February 2019: English Buildings report that the Sunbathers is now on display "on an internal wall in the Royal Festival Hall".

August 2020: Ian Visits reports that the Sunbathers are now installed at Waterloo station where they will be soaking up the sun for the next 5 years.

This section lists the memorials created by the subject on this page:
Peter Peri

Similar to those "spot the ball" competitions, in that no ball is shown. 202...