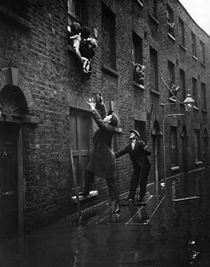 The Environment Agency gets the date wrong but we assume the rest is correct: "On 12th January 1928, numerous areas in London and the surrounding local authorities were flooded. In Lambeth, 14 people drowned in their basement flats."

It was the last flood of Central London. At Millbank 75 ft of the embankment collapsed (the same 75 ft to which the 'high tide' plaque refers, we guess). The Tate Gallery and the Houses of Parliament were flooded. The Tower of London moat was filled. Millbank was the worst affected area and following the flood a lot of rebuilding took place including: Imperial Chemical House, Thames House immediately to the south, and a new Lambeth Bridge. Where do you think you are has a post about it.

This section lists the memorials where the subject on this page is commemorated:
1928 flood

We think the 75 ft of wall which collapsed were actually in Millbank which is...