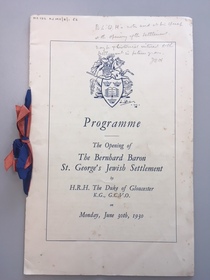 From University of Southampton: "Based in a disused hostel on 125 Cannon Street Road, the Oxford and St George’s Club began in 1914 with a membership of 25 boys. The Club got its name from Basil’s alma mata, and the name of the area of East London that the Club was based in. A year later, a self-taught artist and Basil’s future wife, Rose Loewe, founded an equivalent club for girls at the same hostel." .. "In 1929 the Clubs moved to new premises in Berners Street following the gift of £50,000 (which later rose to £65,000) provided by Mr Bernard Baron. The Bernhard Baron St George’s Settlement building opened in 1930, providing spaces for public worship, administrative offices, the infant welfare centre, the play centre, and accommodation. There was also a roller skating rink, gymnasium, library, and model laundry and kitchen." .. "After Basil Henrique’s death in 1961, Berner Street was renamed Henriques Street to commemorate his tireless efforts in setting up the Club. The Settlement premises were sold in 1973 and the clubs moved to Totteridge in North London."

Apart from the name we can't find anything to connect this organisation with the Oxford House in Derbyshire Street E2, "established in 1884 as the first 'settlement house' where students and graduates from Keble College, Oxford undertook residential volunteering to tackle the challenges of urban poverty first-hand."

This section lists the memorials where the subject on this page is commemorated:
Oxford and St George’s Club / St George’s Settlement

This stone was laid on 9th April 1929 by Bernhard Baron Esq. through whose ge...

To the glory of God and in proud memory of the members of the club and of the...

This was started by John Redington, selling printed sheets of characters and ...