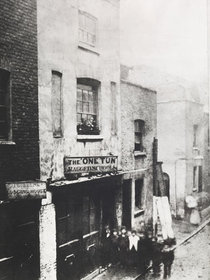 The One Tun pub in Perkins Rents was in the infamous area known as the Devil's Acre. Ragged Theology describes how a London missionary reported this pub as being the venue for a 'school' where street urchins were trained in pick-pocketing.  The philanthropist, Adeline M. Cooper held a meeting in the skittles alley of the pub and raised money to convert the pub into a ragged school.   The picture source says: "The One Tun’s landlord had stripped the premises before he left without paying the rent. By 1871, the school had an average attendance of 133 pupils." Perkins Rents, SW1, still exists but has been totally rebuilt.

In 1879 the lease expired and the school moved to Westminster Buildings, Old Pye Street and continued there as the One Tun Mission until 1930 when it was amalgamated with the Wyndham Ashley Mission, 112 Regency Street, SW1.

This section lists the memorials where the subject on this page is commemorated:
One Tun Ragged School

The hospital was founded by King William III and Queen Mary II, and the schoo...