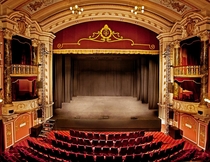 A Grade II listed theatre, which opened originally as just the Wimbledon Theatre. Many famous artistes appeared here between the wars. and the musicals 'Oliver!' and 'Half a Sixpence' premiered here before opening in the west end. It was refurbished in the late 1990s, and after some financial problems, it reopened in 2004 with the addition of 'New' to its name. The golden statue on top of the dome is Laetitia, the Roman goddess of gaiety.

This section lists the memorials created by the subject on this page:
New WImbledon Theatre

Chief Executive of Sadler's Wells when the new theatre opened in October 1998.

The National Theatre company was founded in July 1962 and the first performan...