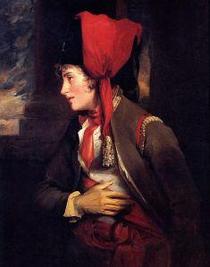 Actress and royal mistress. Born as Dorothy, or Dorothea, or Dora, Phillips in the Leicester Square area, though some sources say she was born in Ireland. Although her father's surname was Bland, it is doubtful whether her parents were legally married. The family home was in Ireland where she made her theatrical debut. On returning to England she took the stage name of Mrs Jordan.

Prince William Henry, Duke of Clarence (later King William IV) noticed her at the Drury Lane theatre and took her as a mistress. They lived together for 20 years, mainly at Bushy House in Teddington and together they had at least ten children. When they eventually separated she was given a stipend on condition that she did not return to the stage. However when a son-in-law fell heavily into debt, she was forced to act again in order to assist him. The Duke got word of this and revoked the stipend. She died in poverty at St Cloud near Paris.

This section lists the memorials where the subject on this page is commemorated:
Mrs Jordan