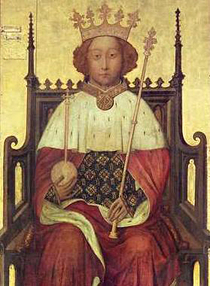 Became king aged 10, following the deaths of first his elder brother, then his father, Edward the Black Prince, and then his grandfather, Edward III.

The Peasant's Revolt occurred when he was king, but aged only 14 so it is difficult to believe that during this event he was doing anything other than just acting out the advice of his council.

Unusually for a King his date of death is only approximate. He was deposed by Henry Bolingbroke (Henry IV to be) and was then what we would now call "disappeared". It is thought he starved to death in captivity. "For God's sake let us sit upon the ground and tell sad stories of the death of kings" (Richard II, Act 3, Scene 2).

This section lists the memorials where the subject on this page is commemorated:
King Richard II