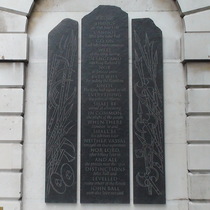 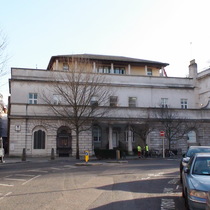 {On the central panel two texts are interleaved on alternate lines:}
{In lowercase:}
At this place on 15th June 1381 Wat Tyler, John Ball and other representatives of the Great Rising met King Richard II to finalise terms for ending the Rebellion. The King had agreed to all the political reforms aimed at alleviating the plight of the people.  However he and his advisors later reneged on that agreement, after killing Tyler in the process near this spot.  John Ball and many others of the Revolt were also later executed.

{In uppercase:}
Things cannot go on go on {sic} well in England nor ever will until everything shall be in common when there shall be neither vassal nor Lord, and all distinctions levelled.   John Ball

{On a brass plaque to the left:}
This memorial commemorating The Great Rising of 1381 was commissioned by Matthew Bell, carved by Emily Hoffnung and unveiled by Ken Loach on 15th July 2015.

'If the Barons merited a monument to be erected at Runnymede, Tyler merited one in Smithfield.' Thomas Paine, 1791

Matthew Bell realised that The Great Rising lacked a proper memorial and that this bay was ready and waiting. It took some effort, and a blog.

The panel to the left shows sharp farm implements; that to the right: spears, battle axes, glaive-guisarmes and a chain mace. We had to research to find the names of these nasty weapons and are depressed by the number of websites gleefully cataloguing them.

The Thomas Paine quote refers to a memorial at Runnymede - in 1791, so not the one erected by the American Bar Association in 1957. The quote comes from 'The Rights of Man, Part 2' published in 1792 and surely indicates that Paine knew of a memorial at Runnymede. We've not found such an ancient memorial there so we went searching on-line and think we've resolved this puzzle. Our page for Magna Carta is now very long - see the last two paragraphs if you want to follow this trail.

The front elevation of this building is very odd, especially at the roof-line. To end up like this it must have an interesting history. The frieze inscription above the pillars must have been installed when the building was enlarged. At ground floor level there are 3 blanked-off window bays, just perfect for memorials, left to right: Peasants' Revolt, Wallace, Marian Martyrs.

This section lists the subjects commemorated on the memorial on this page:
The Great Rising / Peasants' Revolt

The revolt grew out of the increasing severity of the poll taxes imposed on t...

Born St Albans.  As a priest he followed the Lollard doctrine which advocated...

Became king aged 10, following the deaths of first his elder brother, then hi...

Leader of the Peasants' Revolt of 1381. Killed at Smithfield by the Mayor of ...

This section lists the subjects who helped to create/erect the memorial on this page:
The Great Rising / Peasants' Revolt

Designed and carved the Great Rising memorial.  Has a studio in West London. ...

This section lists the other memorials at the same location as the memorial on this page:
The Great Rising / Peasants' Revolt

Being just outside the city walls this was considered a suitable spot for exe...

{On the frieze above the pillars:} Saint Bartholomew's Hospital, Founded by...

The plaque is in the dimly lit museum of Greenwich Heritage Centre.