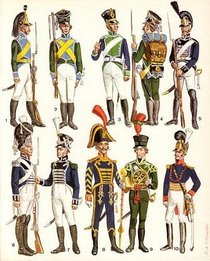 Following the French Revolution France, under Napoleon, fought with most of Europe (primarily Britain, Spain, Russia and Austria) in various alliances for over a decade. The fighting spread as far as Egypt, North and South America. Napoleon was finally defeated by Britain, led by the Duke of Wellington, at the Battle of Waterloo in 1815. This left the British Empire as the strongest power throughout the world, for a time.

Some descriptions have the Napoleonic wars starting in 1793 with the Peace of Amiens providing a brief interlude in 1802-3, but this early period is more usually called the French Revolutionary wars. During these 22 years 1 in 6 British males over the age of 14 entered the services.

This section lists the memorials where the subject on this page is commemorated:
Napoleonic wars