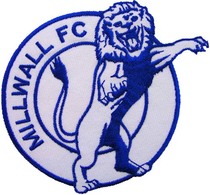 Football club. Founded as Millwall Rovers, the club has retained its name despite having last played in the Millwall area in 1910. From then until 1993 the club played at The Den, (a now-demolished stadium in New Cross), before moving to its current home stadium nearby, (also called The Den). The team's fans have a reputation for hooliganism and revel in their chant of 'No-one likes us, we don't care'.

This section lists the memorials where the subject on this page is commemorated:
Millwall Football Club

{Above the lion symbol and shield of Millwall Football Club:} On this site st...