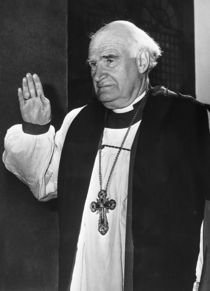 Strange fact from Wikipedia: "In October 2009 it was reported by Maev Kennedy that two divers had found a number of gold and silver items in the River Wear in Durham which were subsequently discovered to have come from Ramsey's personal collection, including items presented to him from dignitaries around the world while he was Archbishop of Canterbury." A burglary gone wrong, perhaps?

This section lists the memorials created by the subject on this page:
Michael Ramsey, Archbishop of Canterbury

Monks were first brought to Westminster in about 960 AD by St Dunstan, then B...

The picture source website provides lots of useful information on the CIM.

Supposed witch. The wife of carpenter John Rogers, she belonged to a radical ...