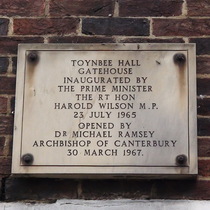 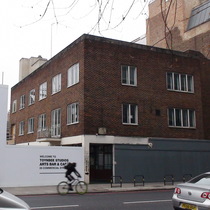 From Toynbee Hall we learn that the original 1884 building was destroyed by WW2 bombs. The Gatehouse was built on the site in 1965, “with help with the International Volunteers Services digging out the basement and Prime Minister, Harold Wilson, turning the first sod”. It was used for various purposes: the Warden’s flat and office; accommodation for Toynbee Hall’s dedicated Residential Volunteers; ground floor housed The Citizen’s Advice Bureau and latterly the Free Legal Advice Centre.

“It was known as The Gatehouse until 2006, when the building was renamed in honour of John Profumo, who passed away in March 2006. John was a long-term volunteer and President of Toynbee Hall who dedicated 40 years of his life to our work and to the people of the East End.”

Demolished in 2017 as part of the redevelopment of the Toynbee Hall Estate.

Spitalfields Life have a good post about Toynbee Hall with a number of useful photos. Using the clock tower as a marker we can say with some certainty that in the photo captioned 'original facade onto Commercial St' the central building with two arches at ground floor and the bay window at first floor, is the building that was replaced by the Gatehouse.

Explore Toynebee Hall gives "The Gatehouse was built to replace the old Warden's lodge..." and has a photo showing the bomb damage to the Warden's Lodge.

This section lists the subjects commemorated on the memorial on this page:
Toynbee Hall Gatehouse

This section lists the subjects who helped to create/erect the memorial on this page:
Toynbee Hall Gatehouse

These 3 plaques are parish boundary markers. We have spent some time searchin...

{Above the London Underground roundel:}In remembrance of the fifty six people...

We were initially surprised to see that the date was a Monday which seemed an...