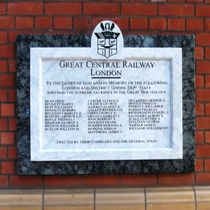 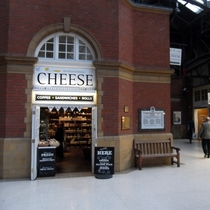 {Beneath 31 names (See commemorated subjects:}
Erected by their comrades and the general staff.

These 3 plaques are in the place previously occupied by the John Betjeman and Marylebone Station plaques, which have been moved to a location further down the concourse.  The 3 new plaques appeared here in about early 2016. The Goods Department Staff plaque looks like it might have been originally erected, elsewhere, shortly after WW1; the other two are modern.

This section lists the subjects commemorated on the memorial on this page:
Great Central Railway London and District Goods Department Staff

This section lists the subjects who helped to create/erect the memorial on this page:
Great Central Railway London and District Goods Department Staff

This section lists the other memorials at the same location as the memorial on this page:
Great Central Railway London and District Goods Department Staff

Andrew Behan has researched all the names on this plaque and writes that it w...

The verse comes from "The Apocrypha: Prayer of Azariah, Chapter 1". We don't...

{On the left side:}This is the site of the north west corner of "C" block, Ca...