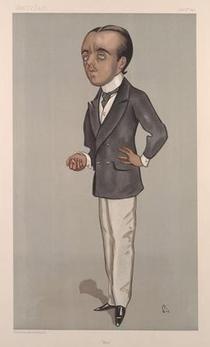 Caricaturist and writer. Born 57 Palace Gardens Terrace, Kensington. In the Oscar Wilde circle of friends. He became successful and famous at aged 24, but never rich.

Half brother and cousin to Herbert Beerbohm Tree, the actor-manager. This strange relationship is due to their father having married two sisters.

In 1910 Beerbohm married and lived the rest of his life at Rapallo, Italy, where he died. Buried in St Paul's Cathedral.

On the subject of laughter Beerbohm observed that, whereas love originates in the physical and culminates in the mental, the vector of laughter points in the opposite direction. We can highly recommend his novel, Zuleika Dobson.

This section lists the memorials where the subject on this page is commemorated:
Max Beerbohm