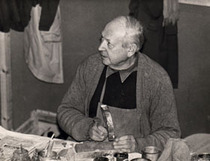 Born Russia. Came to England in 1899 to learn English. Spent time in St Petersburg, Edinburgh and Paris. A 1904 visit to see the mosaics in Ravenna inspired his life's work. Became closely associated with the Bloomsbury Group. Served in the Russian army in WW1. Came to London in 1917 and never returned to Russia.

More mosaic works by Anrep are located on the roof terrace at One New Change and there are floors of his work in the main entrance to the National Gallery; the Blake Room in Tate Britain; the Bank of England entrance; the Greek Orthodox Saint Sophia Cathedral, Moscow Road; the Blessed Sacrament Chapel Westminster Cathedral. He created a work in the Notre Dame de France church in Leicester Place but this was covered, only four years later, with a work by Jean Cocteau.

Lived in Hampstead during most of WW2. He returned to Paris but returned to London after 1965, Hyde Park Gardens where he lived the last part of his life. We are grateful to London Historians’ member, Helen Szamuely, for much of this information.

A professional artist friend excuses her non-sporting inclinations by claiming that the two fields are mutually exclusive. Over many years we have failed to find a single example to prove her wrong, and then along comes Anrep: in 1920 he competed in the men's doubles at Wimbledon. But he is a rare exception to the rule. And in this context we must mention Yves Klein, the avant garde artist was also a black belt judo master. Klein was in London, 1949-50, working in an Old Brompton Road frame shop assisting in the preparation of colours, varnish, etc., but no plaque, as yet.

This section lists the memorials created by the subject on this page:
Boris Anrep

Etcher and painter. Born at Newmill, Foveran, near Newburgh, Scotland. Self t...