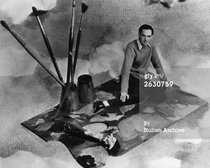 From V&A: “Berkeley Sutcliffe was one of the leading stage designers of the mid 20th century. He was best known for his spectacular and amusing scenery and for the costumes which he designed for revue, musicals and pantomimes, but he also worked for the Bristol Old Vic, creating costumes and settings for Shakespeare. Sutcliffe successfully combined theatre work with a career at the famous London department store, Fortnum and Mason, where he was head designer, and for which he devised the clock that became its symbol.”

This section lists the memorials created by the subject on this page:
Richard Berkeley Sutcliffe

Founded by William Lancaster, Baron Pollock and Sir Arthur Jelf.  For the fir...

Founded by William Shipley as the "Society of Arts" in Rawthmell's Coffee Hou...