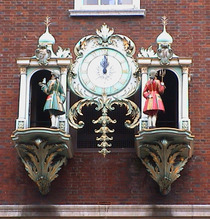 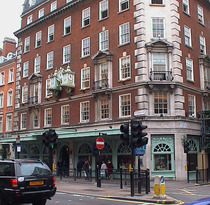 From the shop's website:  "1964 saw a new landmark added to the front of the store - the famous Fortnum's clock, with bells from the same foundry as Big Ben {Whitechapel Bell Foundry}.  Every fifteen minutes a selection of airs is played on eighteen bells, and once an hour Messrs F&M themselves appear to check that standards are being upkept."

We were initially sceptical that the two bewigged four foot-high figures in 18th century servants' attire were ever intended to represent Mssrs Fortnum and Mason themselves but Dr Andrea Tanner, Fortnum & Mason archivist, confirms this and also tells us that the clock was restored as part of their Diamond Jubilee celebrations.  She also named the designer, Berkeley Sutcliffe, and generously provided the drawings of Mssrs F&M, drawn by Sutcliffe for a screen in the boardroom.

Fortnum and Mason gives some history on this 300 year old shop.

This section lists the subjects commemorated on the memorial on this page:
Fortnum & Mason

The records of the founders of Fortnum and Mason are not too clear. In 1707 a...

Records are sparse but it seems Mason owned a shop in St James's Market and i...

This section lists the subjects who helped to create/erect the memorial on this page:
Fortnum & Mason

From V&amp;A: “Berkeley Sutcliffe was one of the leading stage designers of t...

The ride on the Hogwarts Express starts from King's Cross railway station pla...

This historic bollard was presented by the City of Westminster, London, Engla...

This historic bollard was presented by the City of Westminster to the Royal...