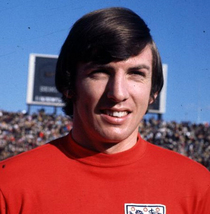 Martin Stanford Peters was born on 8 November 1943 in Egham Road, Plaistow. He played for several teams, principally West Ham United and went on to manage Sheffield United. As a member of the England team in the 1966 World Cup, he scored one of the winning four goals.

He was awarded an MBE in the 1978 Queen's Birthday Honours List.

This section lists the memorials where the subject on this page is commemorated:
Martin Peters

Footballer. Born in Golborne, Lancashire. He played for Liverpool and Bolton ...