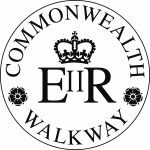 Established in 2012 with a donation made by the Jubilee Walkway Trust. The Trust’s charitable mission is to create walkways in towns and cities around the world to preserve and protect the physical and mental health of people, advance their education in relation to natural and cultural heritage and promote conservation, protection and improvement of the historical and natural environment.

The first marker on the Commonwealth Walkway was installed in 2014 outside the Glasgow Council Chambers at the start of the Commonwealth Games. The Trust has coordinated the delivery of many walkways across the Commonwealth: "1,000 km walkable path, linking 100 cities" and their website provide information on them all.  For London it lists: Jubilee Walkway, Jubilee Greenway, London Commonwealth Walkway, and also: The Queen's Walkway Windsor, Eton Walkway. Some of these walkways existed before the Trust did, and we've seen indications that walkway trusts morph and merge with each other but nothing's clear.

This section lists the memorials created by the subject on this page:
Commonwealth Walkway Trust

Established by . From AIM: The Polytechnic Institution was opened in August 1...