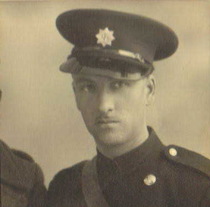 Leading Fireman killed as a result of an air raid on Old Palace School, Bow, E3 on 20 April 1941.

Our colleague Andrew Behan has kindly researched this man: Auxiliary Leading Fireman Martin Charles Parfett was born on 7 August 1909 at Glen Chess, Rickmansworth, Hertfordshire the eldest son of Ernest Richard Parfett and Emily Grace Parfett née Churchill. His father was a Domestic Gardener. He was baptised in Rickmansworth on 1 September 1909. The 1911 census shows the family living at The Gardens, Glen Chess, Rickmansworth.

In 1935 he married Nellie Ethel Carn in Croydon and they lived at 296 Pickhurst Rise, West Wickham. The 1939 England and Wales Register shows him attached the District Fire Station, Glebe Way, West Wickham, Kent and his normal occupation was listed as an Estate Agents Assistant. He died when a German bomb landed on Auxiliary Fire Service Sub Station 24U, which was housed in Old Palace LCC School, St. Leonards Street, Poplar, aged 31 years, on 20 April 1941. He was buried at Beckenham Cemetery and Crematorium, Elmers End Road, Beckenham, BR3 4TD. Administration of his estate was granted to his widow and his effects totalled £615-3s-3d.

This section lists the memorials where the subject on this page is commemorated:
Martin C. Parfett