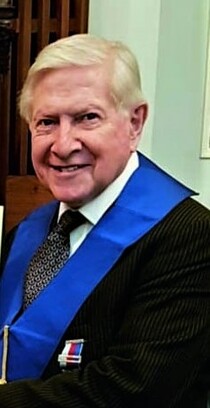 He was listed as an estate manager on the manifest of the Canadian Pacific Steamship 'Empress of Britain', arriving in Liverpool on 10 September 1956 having travelled from Montreal, Canada, with his parents. Their address was recorded as 60 Gyllyngdune Gardens, Seven Kings, Ilford, Essex.

As a Lieutenant Colonel in the Royal Regiment of Artilery, Territorial Army he was made an Ordinary Officer of the Military Division of the Most Excellent Order of the British Empire (OBE) in the 1980 Queen's Birthday Honours List.

Companies House records show that he had been a director of six companies in the 1990's and in addition to having been a Member of Parliament for the Ilford South constituency he was also a chartered surveyor.

He also served as a deputy lieutenant for the London Borough of Brent allowing him to use the Post Nominal Letters "DL" for life. In addition to the the Territorial Army Efficiency Decoration 'TD', he was also awarded the Special Constabulary Long Service Medal and the Service Medal of the Order of St John.

This section lists the memorials created by the subject on this page:
Colonel Sir Neil Gordon Thorne OBE

Lieutenant Colonel Joseph Lee Bennett was born on 19 January 1917 in Boise, A...