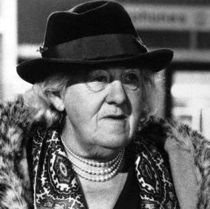 Stage and film Actor. Born Margaret Taylor Rutherford in Balham. She was well into her thirties before she started acting, but rapidly established herself as a much sought after character actress. Most famously she played the part of Madame Arcati in Noel Coward's 'Blithe Spirit', both on stage and film, and appeared as Agatha Christie's Miss Marple in four films. Created a Dame in 1967. While living at Henley she would swim in the Thames to ease her depression. Lived for a time in Old Hall, South Grove, Highgate, at the same time as Rumer Godden was there, in separate flats. Rutherford died in the Chalfont and Gerrards Cross Hospital, Chalfont St Peter, Buckinghamshire.

This section lists the memorials where the subject on this page is commemorated:
Margaret Rutherford

Born as Harry Webb in India. Starred with Olivier in Dave Clark's Time. The S...