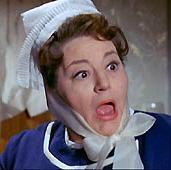 Actrees, born Josephine Edwina Jacques at 125 High Street, Sandgate, Kent. She featured in some of the most successful British radio and television programmes and films. On radio she was in ITMA, Educating Archie and Hancock's Half Hour. On television, she was Eric's 'twin sister' in the 'Sykes' series and probably most famously as several dominating characters in the 'Carry On' films. Married to the actor John le Mesurier from 1949 to 1965. Died at 67 Eardley Crescent, London, SW5.

This section lists the memorials where the subject on this page is commemorated:
Hattie Jacques

Formerly the G.P.O. Film Unit, it was an organisation within the British Gove...